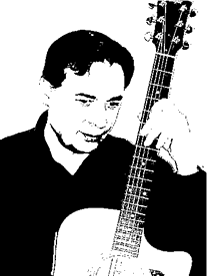 Mark is the owner of EmCee Entertainment and has hosted hundreds of celebrations and festive parties. He is also a semi-retired music teacher and as a performer and conductor he often has a chance to play some live music. Mark sings and plays drums, guitar, piano, percussion and tuba. He has been in bands: wedding, rock, big, jazz, wind, Dixieland, marching; he has conducted orchestras, choruses and musical pit orchestras; and has played in all sorts of smaller ensembles. He is a student of all music genres, and has done some composing and arranging.

Mark is very discerning when it comes to the music selections appropriate for each event. And of course, excellent sound using dependable equipment is a must. Mark consistently offers a high standard of personal service.

Please check out some of my musical friends and associates: 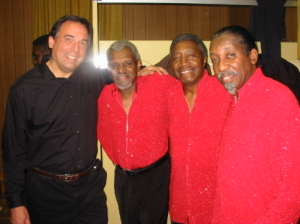 Mark with The Trammps in 2009, known best for their 1978 smash dance hit, Disco Inferno. (Actually, this is the second time Mark has met these guys. In the 90’s, he met and hosted the group for a concert during his regular career stint as Music Instructor). 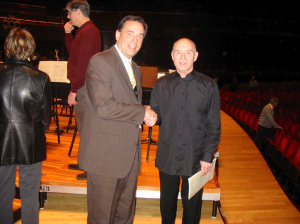 A visit to the Kimmel Center in 2005 and a photo op with the Philadelphia Orchestra director, Christoph Eshenbach. He is a German-born pianist and conductor, and currently holds positions in Washington, D.C. as music director of the National Symphony Orchestra and music director of the John F. Kennedy Center for the Performing Arts. 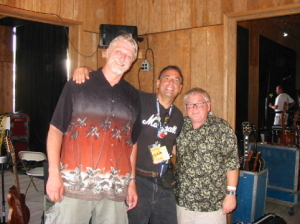 Mark backstage at the Philadelphia Folk Festival hanging out with Keith and Ezra from Trout Fishing In America. This folk duo is best known for their song The Window, played regularly on WXPN radio’s show Kids Corner, hosted by Kathy O’Connell. 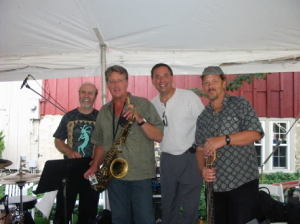 Longtime acquaintance Dave Posmontier and his band co-members Bob Howell (sax) and Chico Huff (bass) at a Chadds Ford Winery event in 2005. Dave is one of the Philadelphia area’s premier jazz pianists, and has admitted to “borrowing” a lick or two from Oscar Peterson.

I really enjoyed the entertainment. It is something that can make or break a function and I was very pleased. I hope you’re free in 5 years for the next reunion!
– Pottstown, PA

It was the best. Many compliments. Thanks for making our day special.
– Collegeville, PA

Thank you for doing an excellent job as the DJ for our wedding. The musical selections were fantastic, and your personality was great for our event. Everyone enjoyed dancing and listening to the music.
– Hanover, PA

Most people said it was the best wedding they had been to, and we think you had something to do with it. Overall, great party! Thanks.
– Ardmore, PA

Due to the weather, we had some last minute changes. We really appreciated Mark’s understanding and flexibility. The music was timed perfectly, and he honored all of our requests.
– Eagleville, PA

The evening was a great success, thanks to the music. We had fun learning the line dances. You are a great asset to your profession. Keep up the good work. The staff at the banquet hall also commented on the excellent music and the professionalism of the DJ. Thanks for a great time!
– Royersford, PA

EmCee was the best value we found. Reasonable price. Great job. We would hire you again in a heartbeat!
– Phoenixville, PA

You were wonderful, our guests made a lot of great comments. You made the day very exciting for us. Thank you.
– Collegeville, PA

Mark was the perfect emcee for our wedding.
– Philadelphia, PA